MycoKey aims to unlock new knowledge and to valorize existing knowledge and data by rapid dissemination to research partners and stakeholders in the chain.
In the MycoKey programme all scientific peer reviewed publications are available through open access. Research data will be deposited in public data repositories for (re)-analysis exploitation and dissemination free of charge.
In this page you can find publications describing the scientific results arising from project’s activities.

In this study, we carried out a genome-wide analysis of family-1 UDP glycosyltransferases in wheat based on the PSPG conserved box that resulted in the identification of 179 putative UGT genes. The identified genes were clustered into 16 major phylogenetic groups with a lack of phylogenetic group K. The UGTgenes were invariably distributed among all the chromosomes of the 3 genomes. At least 10 intron insertion events were found in the UGT sequences, where intron 4 was observed as the most conserved intron. The expression analysis of the wheat UGT genes using both online microarray data and quantitative real-time PCR verification suggested the distinct role of UGT genes in different tissues and developmental stages. The expression of many UGT genes was up-regulated after Fusarium graminearum inoculation, and six of the genes were further verified by RT-qPCR.

Aspergillus species from Brazilian dry beans and their toxigenic potential 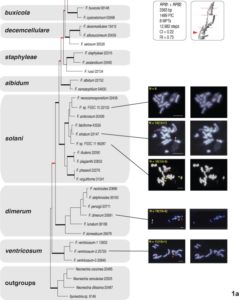 FgPex3, a Peroxisome Biogenesis Factor, Is Involved in Regulating Vegetative Growth, Conidiation, Sexual Development, and Virulence in Fusarium graminearum
Next

Host and Cropping System Shape the Fusarium Population: 3ADON-Producers Are Ubiquitous in Wheat Whereas NIV-Producers Are More Prevalent in Rice
We are using cookies to provide statistics that help us give you the best experience of our site. You can find out more or switch them off if you prefer. However, by continuing to use the site without changing settings, you are agreeing to our use of cookies. Accept Read More
Privacy & Cookies Policy
Necessary Always Enabled